This Java library contains histogram implementations with configurable bin layouts designed for fast value recording. At its base, there are three different implementations:

DynaHist is available as a Maven package on JCenter and should be used via Maven, Gradle, or Ivy. If automatic dependency management is not possible, obtain the jar file from GitHub Releases.

At Dynatrace, we were looking for a data sketch with a fast update time, which can also answer order statistic queries with error guarantees. As an example, such a data structure should be able to provide the 99th percentile with a maximum relative error of 1%. Other data structures like t-digest do not have strict error limits. In our search, we finally came across HdrHistogram, a histogram implementation that intelligently selects bin boundaries so that the relative error is limited over a range of many orders of magnitude. The core of the HdrHistogram is a fast mapping of values to bin indices by bit twiddling, which reduces the recording time to less than 10ns. Although we loved this idea, this data structure did not quite meet our requirements for several reasons:

Therefore, we started developing our histogram data sketch, which uses the proposed better mapping and solves all the mentioned issues. After many years of successful application and the emergence of an open source initiative at Dynatrace, we decided to publish this data structure as a separate library here on GitHub.

For our benchmarks, we used random values drawn from a reciprocal distribution (log-uniform distribution) with a minimum value of 1000 and a maximum value of 1e12. To avoid distorting the test results, we have generated 1M random numbers in advance and kept them in the main memory. For the comparison with HdrHistogram we used the DoubleHistogram with highestToLowestValueRatio=1e9 and numberOfSignificantValueDigits=2. To record values with equivalent precision, we used an absolute bin width limit of 10 and a relative bin width limit of 1% over the range [0, 1e12/>. The corresponding layouts LogLinearLayout(10, 0.01, 0, 1e12) and LogQuadraticLayout(10, 0.01, 0, 1e12) have been combined with the static and dynamic implementations of DynaHist resulting in 4 different cases.

The recording speed was measured using JMH on a Dell Precision 5530 Notebook with an Intel Core i9-8950HK CPU. We measured the average time to insert the 1M random values into an empty histogram data structure, from which we derived the average time for recording a single value. All four investigated DynaHist variants outperform HdrHistogram's DoubleHistogram significantly. The static histogram implementation with the LogLinearLayoutwas the fastest and more than 35% faster than HdrHistogram. 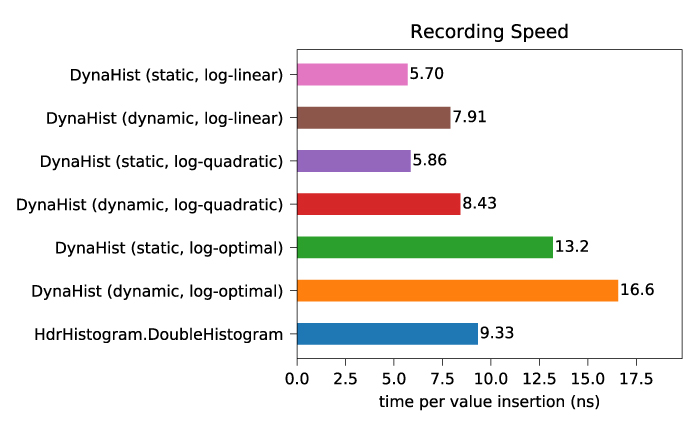 The memory usage of the histogram data structures was analyzed after adding 1M random values as in the speed benchmark before. Again due to the better bin layout, DynaHist significantly outperforms HdrHistogram. Especially the dynamic histogram implementation and LogQuadraticLayout require just 15% of the memory space HdrHistogram takes. 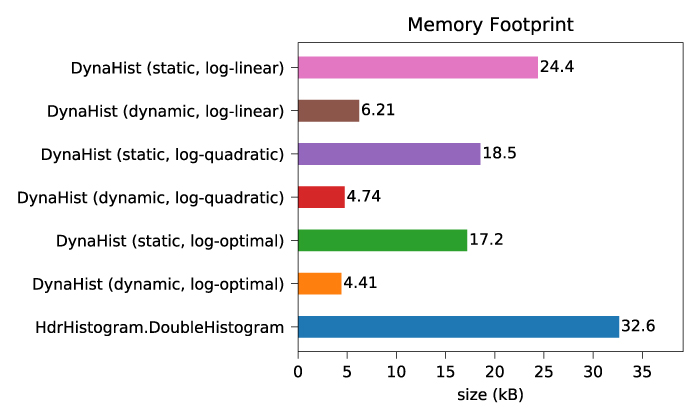 Similarly, the serialization, which is more or less a memory snapshot of the dynamic histogram implementation, is much more compact than that of the HdrHistogram. 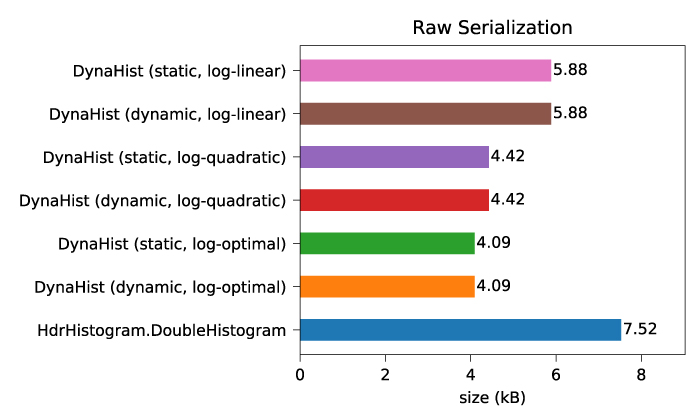 The space advantage is maintained even with compression. The reason is that DynaHist requires much fewer bins to guarantee the same relative error, so less information must be stored. 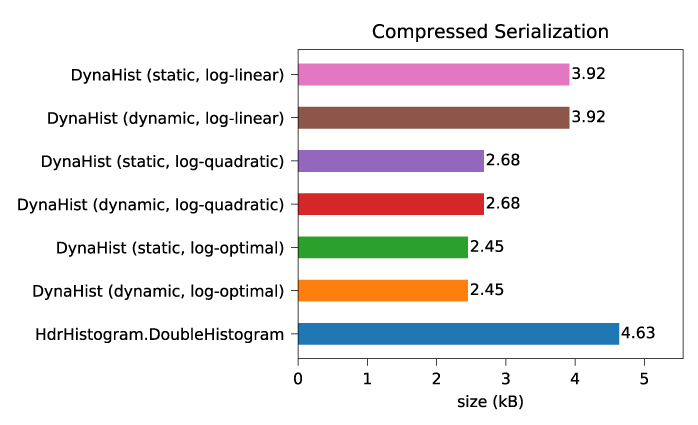 A Layout specifies the bins of a histogram. The regular bins of a layout span a certain value range. In addition, DynaHist uses an underflow and an overflow bin to count the number of values below or beyond that value range, respectively.

and the relative bin width limit corresponds to

If a bin satisfies either (1) or (2), any point of [b(i), b(i+1)/> approximates a recorded value mapped to the i-th bin with either a maximum absolute error of a or a maximum relative error of r. In particular, if the midpoint of the interval (b(i) + b(i+1)) / 2 is chosen as an estimate of the recorded value, the error is even limited by the absolute error bound a/2 or the relative error bound r/2, respectively.

The bin boundaries of a layout, for which either (1) or (2) holds for all its bins, must satisfy

We call bins close to zero and have a width of a subnormal bin. Normal bins represent an interval with larger values, which have a width defined by the relative bin width limit. The following figure shows an example of such a bin layout.

In this example, the bins are enumerated with integers from -9 to 8. The first and last bin indices address the underflow and the overflow bin, respectively. The widths of normal bins correspond to a geometric sequence. An optimal bin layout

While log_2(r) and log_2(c) can be precomputed, the calculation of log_2(v) remains, which is an expensive operation on CPUs. Therefore, DynaHist defines non-optimal mappings that trade space efficiency for less computational costs. If g(v) is replaced by any other function steeper over the whole value range, the error limits will be maintained. Therefore, DynaHist uses linear (LogLinearLayout) or quadratic (LogQuadraticLayout) piecewise functions instead. Each piece spans a range between powers of 2 [2^k, 2^(k+1)/>. The coefficients of the polynomials are chosen such that the resulting piecewise function is continuous, and the slope is always greater than or equal to that of g(v). The theoretical space overhead of LogLinearLayout is about 44%, and that of LogQuadraticLayout is about 8% compared to an optimal mapping.